Tribal Art and Israeli Art gallery is proud to present the collection of sculptures by the Makonde tribe.

Our collection of tribal art consists of several dozens of wooden sculptures by the Makonde tribe, all available for sale at the gallery and online.

Today we want to talk about this special type of art.

The Makonde are an ethnic group in northern Africa: Tanzania, Mozambique and Kenya.

It’s a matrilineal society where children and inheritances belong to women, and husbands move into the village of their wives. Their traditional religion is an animistic form of ancestor worship, and they managed to keep it, successfully resisting predation by African, Arab, and European slavers.

In Makonde rituals, when a girl becomes a woman, Muidini is the best dancer out of the group of girls undergoing the rituals.

The Makonde are best known for their wood carvings, primarily made of blackwood (Dalbergia melanoxylon, or mpingo), and their observances of puberty rites.

Ujamaa, or Tree of life

This style of Makonde art is formally known as Dimoongo, meaning “power of strength” or “tree of life”.

These sculptures portray clusters of connected wrestlers holding up a winning victor.

Gradually, the main figure shifted to represent tribal heads or other people in unity with community members or family. But regardless of who the central figure of a sculpture is, this style represents one central figure, surrounded by and supported by other figures.

Such sculptures exemplify “ujamaa” (family ties) or relationships in a community. They symbolise underlying reverence to ancestors, family and society.

Shetani (“devil” in Swahili) wood sculptures represent spirits from Makonde mythology. This style uses the appearance of otherworldly physical traits, like large, distorted facial or body features, and sometimes of animals – to signify the spiritual realm.

The essence of Shetani is thought to take five forms: human, mammal, fish, bird, and reptile. In some sculptures, there are also culturally significant symbols, like a mother’s breasts or calabashes, used to carry water.

Binadamu, a naturalistic type, captures the essence of Makonde social roles. Most common are depictions of men smoking and women fulfilling household chores. This style flourished with the appearance of Portuguese in the areas and showed interest in Makonde art: locals began to create figures embodying the daily lives of Makonde men and women to appeal to westerner taste.

The origins of the collection

The Makonde art collection of Tribal Art and Israeli Art gallery came from a private collector who lived in Tanzania for many years after fleeing the Holocaust in the 1930s.

There he fell in love with the Makonde tribal culture and art and made sure to buy more and more items, using every opportunity. Most of the sculptures are now more than 100 years old.

All of the sculptures are one-of-a-kind creations. Some of them serve ritual purposes that portray the relationship between man and the divine, while others mimic social relations within a tribe. Many sculptures represent animals that symbolise power, wisdom and skillfulness. Some are conceptual, symbolic works that represent abstractions, such as faith and serenity. Together they create a complete spiritual world, one that invites each individual to draw closer, to explore, and to connect.

The collection generated a great deal of excitement among collectors and, in the early days of the exhibition, three special items of the Shetani style were bought. 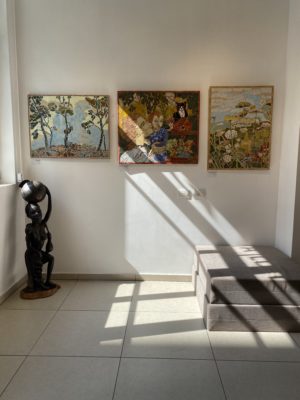 We invite you to have a look at the collection at the gallery or on our website, and choose a powerful sculpture for your home!